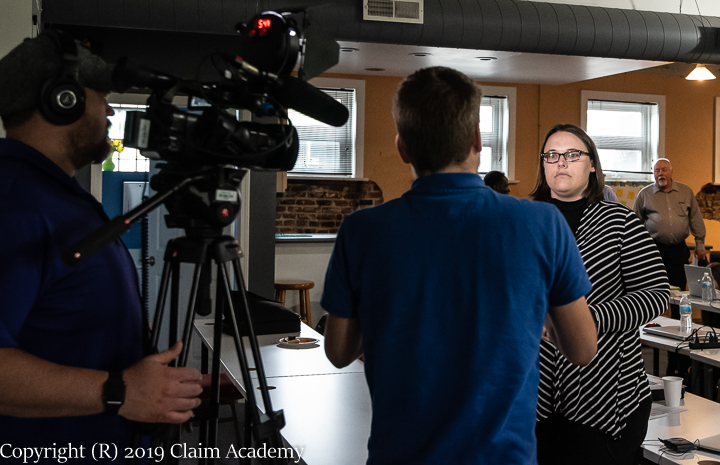 Claim Academy students have a lifelong love of learning and problem-solving. Claudia Sittmann, an educator, St. Louis native, and world traveler, with a passion for software development and education, is no exception. She found a new career path and a new job as a software developer. You could say programming and a love of learning are all in the family–her father was one of the developers that helped create IBM’s famed AI interface, Watson. Sittmann’s mother, a retired teacher, also helped spark Claudia’s love of education, learning, and helping others. We sat down with Claudia to discuss her experiences in education, the inspiration to reinvent herself, and her challenges and accomplishments in becoming a full stack software developer.

Tell us a bit about yourself, Claudia. Where did you grow up?

I was born in Germany and moved to the US when I was young, so I don’t remember a lot about it.  I have lived in St. Louis pretty much all my life, and I grew up in Webster Groves. My mom was a German language teacher, and my dad was a software engineer for IBM. He did some of the programming for the Watson program.

My first career was teaching Spanish, French, and German to middle school students (sixth, seventh, and eighth) at Mehlville in South County. I kind of took after my mom and pursued teaching.  I’ve been doing that for six years, and I really enjoy languages, traveling, and sharing that with my students, but I just started to feel that I wasn’t being challenged.

I went to high school here, and then I attended the University of Indiana in Bloomington. I studied German and Spanish language and literature,  and I received my bachelors. After finishing my undergrad, I moved back to St. Louis to attend Webster University and earned my masters in education and my teaching certificate.

It took me a few years to figure out what to do with my bachelors in linguistics, and teaching was in the family, so it felt like the natural next step.

I hear you come from a family of coders and educators. How did they influence your choice to become a software developer?

Well, watching my mom work as an educator made me want to help people. I liked how she helped students and formed relationships. Initially, that’s why I wanted to go into teaching, then I realized there were other ways I could help people and also challenge myself.

My dad was a people person, but he was also one of the smartest people I have ever met. He knew a lot of famous people and did some of the coolest things working on software. He traveled all over the world–Japan, Switzerland, Germany, and throughout a lot of other European countries.

I finally realized that I could do something more challenging and could fulfill my passions. I wouldn’t change being a teacher for the five years that I’ve done it. I think that teaching translates well into other professions.

Tell us more about your study of linguistics.

We grew up hearing my parents speak German in the house. I used to go to German language classes on the weekend. As I got older, I realized that there’s a lot more to languages than just the reading and writing aspects. I’m the kind of person that’s always liked puzzles and riddles, and I realized that every language is just a different puzzle with different pieces and patterns.  If you can figure out those patterns, you can speak almost any language. The first class I ever took in linguistics was so challenging, but I really enjoyed it, and I kept at it.

I have found that there are a lot of similarities between linguistics and coding.

What was your first exposure to coding or software development, and how did that lead you to Claim Academy?

Definitely growing up and seeing my dad coding, but recently, through my teaching, and taking notice of the big shift in education-STEM (Science, Technology, Engineering, and Math)  that also helped motivate me to make a change. I’ve been preaching to my students, especially my female students, that the field needs more women, and that they can do it. We recently had an hour of coding project we did at the school, and I loved it.  I liked teaching all my female students how to do this, so I figured that I’d learn how to code.

The First thing was that my sister did the same transition–from education to coding. She went back to school and earned her associates in computer science. I wasn’t sure I wanted to go back to school, especially after I had already earned my bachelors and my masters. Going back to school for two or four more years wasn’t that appealing to me.

I did a lot of research into Claim Academy and other places. Your reviews and personal testimonials from former Claim Academy graduates really convinced me that I needed to be here.

How did your experience in education inform your life and outlook?

I guess that through my higher education experience, I had the opportunity to travel and study abroad. And, then, as a teacher, I actually got to chaperone a trip with students to Costa Rica. I’ ‘ve been very fortunate to travel a lot. I think travel has opened my eyes, not only to technology but to other cultures. It’s also taught me how to get along with anyone, any race, or any culture. That’s one of my strengths–I can get along and interact with anyone.

Who inspired or continues to inspire you?

I guess it’s a bit cliched, but I’d have to say, my dad. He passed away almost seven years ago. There are so many times when I wish he were still here. He was such a valuable resource, and I didn’t realize how lucky I was until he was gone.  I try to model myself after him–he was friendly and really smart.

How do you relax after a long day of coding?

Honestly, my dog and three cats are my babies. They help me relax after work and school. I love Netflix, and I love watching all the foreign language films.

I also like playing sports video games. I play sports vicariously through gaming. I like a lot of spy and war games with missions to complete.  I also enjoy puzzles too, I like solving problems, and it’s great escapism.

How did you decide to select Claim Academy from all the coding boot camps out there?

I have a lot of friends that were looking at Launch Code. In theory, they sounded great, but it wasn’t a great fit. I was looking for a small, tight-knit family, and I don’t have to wait in line. Meeting Ola, seeing the facilities and meeting the people.

What was the most challenging moment at Claim Academy, and how did you overcome it?

I guess it was during our first project. In the beginning, most everything made sense, then it was time for the first project, and it’s time to sink or swim.  You have to really put what you’ve learned to use. I started to doubt myself and thought I didn’t know what I was doing. With the help of the instructors and my sister, I figured it all out by breaking it down into smaller pieces. In the end, when the first app, I did actually worked, I realized I could do this.

There’s always a point where I think every student has some doubts. You just have to go to the next step and stay motivated.

Did you try to learn to code on your own?

I did try to learn on my own. I learned some small chunks of things here and there, but I couldn’t see the big picture or understand how it was all connected. It was also challenging to determine what I should focus on.

Some people can learn on their own, but I think most people need the structure. Claim Academy knows what you need to know. I have never been in the tech industry, so I don’t know what I need to know. That’s what’s great about being here–Claim Academy’s instructors know precisely what skills you need, and they’ve formulated the lessons in a way that you get all that.

I tried the free approach to things, and it wasn’t enough for me. I learned a little bit of HTML, and that’s about it. I felt like I was going down a path that wasn’t going to lead me to learn what I actually needed to know to do the job. At that point, I was willing to spend money on the right program, and that’s where Claim Academy came in. On the first day I visited, I was a bit intimidated when Praneeth told me that you don’t accept everyone. At first, that kind of scared me, but then I realized that you were being honest and responsible. That really showed me that you wouldn’t just take a student’s money, especially if you believed they couldn’t succeed. That ended up putting me at ease in the long-run.

.
What do you think the future of coding is?

What would you tell someone considering a career in coding, especially women?

Don’t sell yourself short. I hear a lot of my female friends say that there’s no way they could ever do it.  ; I tell them that you can. I think too many people are misinformed about what programming or coding entails. If you have good math and logic skills, you can do this.

I doubted myself from the first time I even considered the thought of learning to code and changing careers. It’s week four, and I’ve already received my first job offer. I’m blown away. If you want it bad enough, it’s totally worth it. I know a lot of people that could do it, but don’t believe they can.